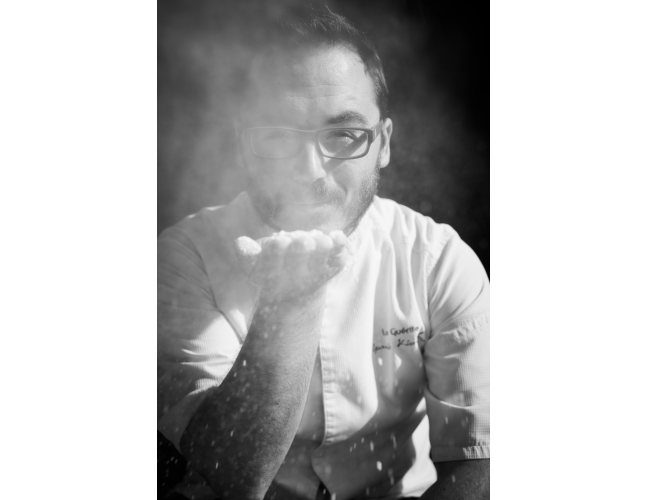 Yiannis Kioroglou was born in 1981 in Athens. Growing up he used to love the scents of homemade food that came out of the houses in the noons. Assigned to work in a kitchen during military service, he realized his love for cooking and the kitchen routine. It was that time that he decided to become professional and studied culinary arts in Athens.

Working in prestigious restaurants of Athens was not enough for him as he was eager to evolve his culinary knowledge and to explore other cuisines. From 2005 until 2008 he worked in Trieste, Italy, Ljublijana, Slovenia and in Lasarte – Oria, Spain at 3 star Martin Berasategui Restaurant. This culinary experience gave Kioroglou an expanded perspective of Mediterranean cuisine.

From 2008 Kioroglou established his career in Greece as a well-respected Chef working in famous and awarded restaurants. Passionate about his profession, he never remained still and satisfied with his success. He continued exploring cuisines, famous kitchens and improving his culinary along with organizational skills by staging in Michelin starred restaurants such as Quique Dacosta Restaurant (2 Michelin) Dénia, Spain, Santo by Martin Berasategui Restaurant (1 Michelin) Sevilla, Spain, Konstantin Filippou Restaurant (1 Michelin) Vienna, Austria.

In 2013 he became Chef de Cuisine of La Guérite Restaurant in Cannes France, a collaboration that boosted his career. At La Guérite Restaurant he had the chance to use all his so far gained experience and developed skills and managed to turn the restaurant into a hot spot of high quality cuisine that serves up to 500 covers per day in high season. His deep knowledge of Greek, French, Spanish and Italian cuisine has formed the basis of his culinary style, and also the gastronomic concept and profile of the restaurant, which has been warmly embraced by its guests. The cornerstone of his cuisine is made up of top quality ingredients, deep flavours and traditional Greek hospitality (philoxenia) which every guest enjoys when visiting “La Guérite”.